Despite this being book four in a series, it is very much a new start for the series, different lead, new love interest and all. Reading the previous three books starring Nevada and Rogan will of course be helpful in understanding the relationships and power systems in play, but it’s not strictly necessary. Sapphire Flames is the book for you if: 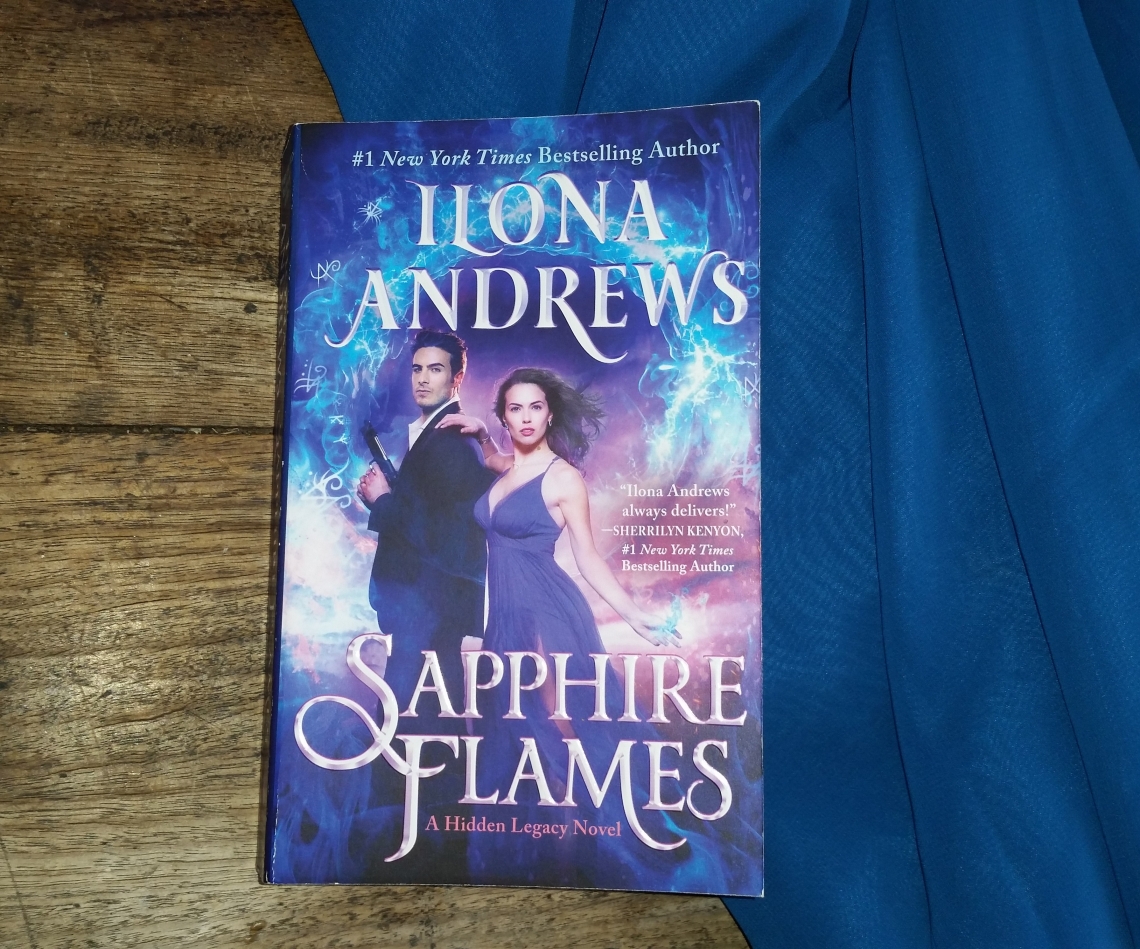 The cover is fine, at least Alessandro is fully clothed, though I’m not really sure what the title or the flame in Catalina’s hand is supposed to represent

In a world where magic is the key to power and wealth, Catalina Baylor is a Prime, the highest rank of magic user, and the Head of her House. Catalina has always been afraid to use her unique powers, but when her friend’s mother and sister are murdered, Catalina risks her reputation and safety to unravel the mystery.

But behind the scenes powerful forces are at work, and one of them is Alessandro Sagredo, the Italian Prime who was once Catalina’s teenage crush. Dangerous and unpredictable, Alessandro’s true motives are unclear, but he’s drawn to Catalina like a moth to a flame.

To help her friend, Catalina must test the limits of her extraordinary powers, but doing so may cost her both her House–and her heart.

First, I’ll address the most glaring change: Nevada is no longer the narrator or the Head of House. This is explained within the book in a satisfactory way, and I genuinely think it’s for the best (for the characters and the series). I’m going to avoid the impulse to compare the two sets of characters, because both Catalina and Nevada deserve better. I did originally feel like there were unnecessary similarities at times (Augustine arriving in the middle of the night and the crush-exposed-to-client-via-sister-prank scenes in particular), but while Catalina and Nevada are similar (as should be expected, they’re sisters) they are unique characters.

Both are strong, powerful women in their own right, and while the dynamics between them and their family as they play the role of Head of House are similar, it would be stranger if it was completely different. Catalina learned to be a Head of House from watching Nevada. To an extent, she probably learned how to behave in a relationship from Nevada and Rogan too. Also—her family haven’t changed materially. Of course the way she works with them will be similar. Similar, but not exactly the same. As a middle child, Catalina is better at diplomacy and delegation than Nevada, who tends to martyr herself trying to take on the world and treat her whole family as children to be protected. Catalina’s magic has also molded the way she interacts with the world, (Nevada’s did too, but their magic is as different as the effects). As such, Catalina is guarded; adept at showing people what they expect to see and taking care to stay emotionally uninvested. Nevada is a classic heroine, but Catalina is a far more realistic example of what it would take to successfully lead a large organisation long-term.

Huh, guess I felt stronger about that than I thought. Well, after a whole paragraph of comparisons I said I wouldn’t make, let’s move on.

Catalina’s budding relationship with Alessandro was fine, but not a highlight for me. Romance rarely is, but I usually enjoy the witty banter. For whatever reason, Alessandro as a character fell a little flat; maybe once we get more than hints at his backstory this will change (there were some promising titbits at the end of the book, but to avoid spoilers I shall avoid hinting at the hints). I was glad that the distinction was made between the fantasy of Alessandro that Catalina had a crush on, and the actual person she has begun to fall for. I hate love-at-first-sight/lust-at-first-sight relationships that never get developed any further than that, fortunately, Ilona Andrews is1 not an author that skimps on relationship building.

A surprise fascinating character in this book (other than the very creepy antagonist) was Linus, introduced in the earlier books (but again, if you’re a new reader, all relevant info is provided). His relationship with Catalina and the Baylor family, as well as with Houston’s magical elite, was very fun to read, and promises to be developed further in Catalina’s continuing adventures2. Linus and Alessandro’s interactions were also hilarious, and I need to see how Leon and Bern relate to Linus, for reasons3.

That brings us neatly around to Leon and the rest of the family’s response to Alessandro. Leon’s antagonism was unexpectedly hilarious4, especially after the hero worship to which Rogan was treated. Grandma Frida continues to delight, and I finally realised why I love her so much5: she reminds me of the shameless grandma from Mulan. I’d link a .gif of her here, but I have no idea how copyright works and Disney is a terrifying media juggernaut, but rest assured, Frida seeing Rogan/Alessandro and not-very-subtly whispering ‘Sign me up for the next [house] war’ is perfectly in character for either bold grandma character.

The supporting cast in the Hidden Legacy books remains outstanding, Bug and Mrs Baylor (who I had to google the name of, for anyone else who can’t remember, it’s Penelope) both get a little time to shine in this book, and there were promising threads of an upcoming subplot concerning Mrs Baylor. Sergeant Teddy also makes a brief appearance, and if there’s not more Maddy, Cornelius and Zeus in the next book I will riot6. Augustine is one of my favourite recurring characters in this series, and I am ridiculously excited to see what he does after the events of this book. Runa and Ragnar’s magic is fascinating, and I expect there will be plenty of opportunities for it to come in handy in future books.

This book was great in its own right, and also for the series overall. There was a lot of work done to lay the foundations for true independence, for the members of the family and House Baylor and Baylor Investigations as a whole. I’m glad House Baylor no longer relies on Rogan’s wealth or security team, and I’m excited to meet the potential additions to said team that were briefly mentioned (that’s about as specific as I can get without spoilers).

The plot of Sapphire Flames was fast paced and exciting, just like the rest of the Hidden Legacy novels. Much like the preceding books, I bolted through this one in a day and now have to wait a whole year for the next—at least now there’s one more entry to re-read while I wait.

After I wrote my review of Sapphire Flames, I ended up devouring Burn For Me that night, because I needed more Hidden Legacy damn it! I have to admit, Sapphire Flames is a good book, but Burn For Me was amazing. Solid plot, amazing magic and political system, intros to all major characters and great chemistry between the main couple. Nothing in this book is extraneous, every conversation builds the world, illuminates a character or moves the plot—most commonly all three. This is masterful writing, folks, the kind that flows so effortlessly you read a book in a night without really meaning to.

The authors also resist the urge to spell everything out, leaving obvious hints about Nevada’s magic, and less obvious hints (that become very apparent after you’ve read the later books) about her family history and the overall plot for the rest of the series. I have other books to read and review, but I have a feeling that I’m going to end up re-reading the other Hidden Legacy books this month. If you’re on the fence about Sapphire Flames, you really should consider reading (or re-reading) Burn For Me, it will probably change your mind.

1I know they’re a writing team, but saying ‘Ilona Andrews are an author’ sounded horrible

2’The Continuing Adventures of Catalina Baylor’ sounds like the sort of steampunk, detective mystery book I would have loved as a child, FYI

3I want an on-page interaction with Bern and Leon’s parents and their actual family too, at some point

4Kate Daniels fans will get a smug, knowing chuckle from the apple pie gag

5There’s a bunch of reasons, for all of them, just read every scene in which she appears or is mentioned, because Frida is amazing

6I’m kidding. But if there’s ever a Zeus plushie I will spend my own money dollars to buy one