Wild Country is the second World of the Others novel, and I admit I was a little surprised that it didn’t seem to tie into the events of Lake Silence at all. In fact, had I more recently read Etched in Bone, a lot of the events of the book would have been more expected due the overlapping timelines and intertwined events, so I’m glad for my poor memory1. That aside, the novel is an interesting read, with the continued exploration of themes surrounding the exploitation of the natural world, and the grey area between protection and control. 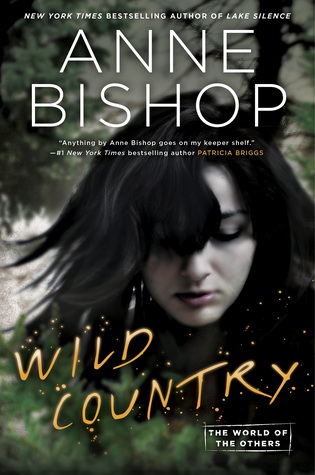 Not a jaw-dropping cover, but there’s nothing wrong with it

In this powerful and exciting fantasy set in the world of the New York Times bestselling Others series, humans and the shape-shifting Others will see whether they can live side by side…without destroying one another.

There are ghost towns in the world—places where the humans were annihilated in retaliation for the slaughter of the shape-shifting Others.

One of those places is Bennett, a town at the northern end of the Elder Hills—a town surrounded by the wild country. Now efforts are being made to resettle Bennett as a community where humans and Others live and work together. A young female police officer has been hired as the deputy to a Wolfgard sheriff. A deadly type of Other wants to run a human-style saloon. And a couple with four foster children—one of whom is a blood prophet—hope to find acceptance.

But as they reopen the stores and the professional offices and start to make lives for themselves, the town of Bennett attracts the attention of other humans looking for profit. And the arrival of the Blackstone Clan, outlaws and gamblers all, will uncover secrets…or bury them.

Wild Country has a whole host of strong female characters, all nuanced and unique in a way that is refreshing to read. Jana is a great character, and the relationships she builds amongst the townsfolk are respectful, believable and fun to read. The way she interacts with Barb is a highlight of the book, reading about their interactions with the ‘me time’ cell made me laugh aloud several times. Jesse’s existence independent from, but still related to her position as Tobias’s mother was another small example of the way female characters are so often dehumanised or put in a box of only existing in context to a male character. With it’s many and varied important female characters—not all of them on the ‘right’ side—Wild Country most assuredly does not fall into that trap.

Virgil is a great character, allowing as he does for an examination of the way someone’s past experiences can taint their perceptions of the world. It grated a little that Jana is shown to have to work very hard to understand Virgil, but the expectations placed on him seem noticeably lower. The in-world reasons for this are clear, but it made Virgil less sympathetic at times.

Another high point in this novel was the chance to watch events play out in a different setting, still led by the others, but with unique problems and power structures because of this. I hope that the interesting cast of characters that populate Bennet continue to be explored in further novels, as I feel there are a few characters that haven’t yet received the rewards they have earned. Madam Scythe in particular deserves to be fleshed out further in future novels.

The sexual and romantic relationships (or hinted at potential for relationships) in Wild Country are well written, never feeling shoehorned in or abrupt. As long-time readers of Anne Bishop’s novels will know, the attitude surrounding the protagonists and their circles of friends always promotes the healthy expression and exploration of sensuality and desire. In particular, the healthy portrayal of (safe) casual sex that a women genuinely enjoys is something that is ridiculously rare, but that can be found fairly often in Anne Bishop’s works. That’s why I was a little disappointed when a character’s enjoyment of rough sex was added to Wild Country seemingly only to cement their position as a bad person. Had the Dark Jewels series not sent a completely different message, I would have assumed this was a prejudice of the authors creeping into the book. As it was, it seemed an awkward addition to Wild Country, that cheapened the otherwise universally elaborate and enjoyable characterisation.

The villains of this book at times seemed a little cliché, a problem I’ve had a few times with the antagonists in The Others world. At times it strains credulity that humanity would be so incapable of learning to work with the Others, though Anne Bishop does a good job of writing plausible reasons for villains and antagonists to ignore their instincts towards self-preservation.

This book was action packed, and while I’ll admit to being surprised at the amount of violence and death that ends up taking place, I’m glad at least for the message that actions have consequences, and that some things should never be borne. Fans of Jim Butcher’s Dresden Files, Laura Anne Gilman’s Devil’s West books, Ilona Andrews’ The Edge series, Nalini Singh’s Psy-Changeling novels or Anne Bishop’s previous works will enjoy Wild Country, and there’s a chance that reading the previous books in the world or series isn’t even necessary to enjoy the book2. So if you love urban fantasy with interesting characters crashing up against each other in a community setting, and old-school justice that tends to solve problems in a permanent fashion, Wild Country may be for you.

1A scene that occurs late into the book which I shall avoid mentioning for reason of spoilers was all that tipped me off, prompting me to skim Etched in Bone after I finished Wild Country