NB—I received a free copy of this anthology for review via Netgalley, all opinions are honest and my own 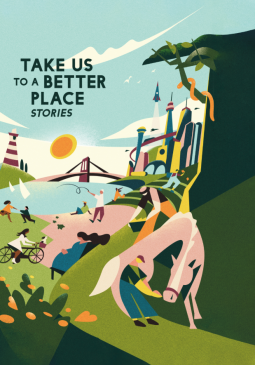 The cover, and the illustrations within the book, are a little simplistic for my tastes, but the cover is bright and cheerful and does indeed suggest a better place which the stories and lessons within might guide us towards

Take Us To a Better Place: Stories is a collection of powerful, perceptive, and seamlessly crafted fiction from a diverse group of storytellers that tells multiple truths about the realities of our health and well-being and the world in which we live. Roxane Gay writes: “These collected stories…are hopeful and cautionary tales. They are, above all, a call to action, offering all of us the opportunity to rise to the occasion of contributing, in the ways we can, to a world where a healthier life is possible for all.”

Conjuring a present and future that is at once vivid and hopeful, as well as heartbreaking and perilous, these deeply human stories will linger long after you finish. The stories spark new ideas about what a healthy community might hold—and how we might get there.

Robert Wood Johnson Foundation is the nation’s largest philanthropy dedicated solely to health. The Foundation is working alongside others toward its vision of a Culture of Health, where everyone has a fair and just opportunity for health and well-being. It is in this spirit that the Foundation invited ten authors to write a story about what a Culture of Health means to them. This book is the result and is offered free to readers by the Robert Wood Johnson Foundation. Visit http://www.rwjf.org/fiction for more information.

The idea for this anthology—a collection of stories meant to shine a light on various issues occurring and worsening, and show potential solutions—is an interesting one, and the stories that resulted take very different approaches. I do feel the need to include a content warning for this anthology, there are mentions of domestic violence, child abuse, animal abuse, physical violence and murder, islamophobia, xenophobia, racism, classism, poverty, self-harm, alcoholism, substance abuse, homophobia and possibly other issues that I have forgotten. If you’d prefer to avoid sensitive matter related to the topics I just listed, Take Us to a Better Place Stories may not be for you.

The anthology starts of weak, in my opinion, and grows better from there. None of the stories are truly bad, but the solutions they seem to suggest are not always realistic. For example, The Flotilla at Bird Island sets up a plausible world ravaged by climate change, but the solution suggested is far less fleshed out. The characters in this story were also not very sympathetic or realistic, and while I enjoyed the story (the line “I wanted to ask of we could fly a bit farther, in the space in between…”) is beautiful and found several parts touching or entertaining, I didn’t think the story was effective at inspiring change.

Paradise by Hannah Lillith Assadi was much better, and though the topics covered in the story—xenophobia, systematic inequality etc—are huge and seemingly insurmountable, the story delivers an inspiring message of hope, family and community. Rita is an interesting and nuanced character, and her backstory is brought to life beautifully.

The Erasure Game by Yoon Ha Lee was the reason I requested this anthology, and similar to his Machineries of Empire series this short story includes some non-binary representation. The story itself is quite different in tone from the previous work I have read from this author though, being quite reminiscent instead of Scott Westerfeld’s Uglies series. There’s a distinctly non-apocalyptic dystopian feel to the story, and the conclusion reads like a bleak indication of where our current situation could lead, rather than a path we might take to a solution. What solution can there truly be to a society that quietly cedes rights in exchange for convenience and efficiency?

Achy Obejas’s The Sweet Spot comes next, and while I thoroughly enjoyed the realistic and intersectional portrayal of living with a disability, I found the conclusion of the short story jumbled and confusing. I didn’t truly understand what social issue was being spotlighted, and didn’t think any solutions were proposed, realistic or otherwise. I truly enjoyed the characters and situations set up, but was not satisfied with the way the story ended.

Reclamation by David A Robertson is a story told in the form of comic strips—not my preferred medium. The story itself is a hopeful one, but perhaps due to the structure I though it spelled things out in a way I found almost reductive. Fans of a more visual style will likewise disagree, and the change of pace was a welcome one within the collection.

If the anthology started slowly, there is no doubt that it finishes strong. Obsolescence by Martha Wells was hands down one of my favourite within the anthology, and the science-fiction style of the short story was a marked change from the more modern/near-future feeling of the other stories. The short story sets up a classic closed-mystery scenario that drives tension remarkably well, and the story was thrilling and well-paced, while also allowing for commentary, character development and world-building. The portrayal of diligence on the part of adults, and the need to foster the innovation and optimistic idealism of future generations could not be more relevant than in a time when a sixteen-year-old was (deservedly) named the Times Person of the Year.

Madeline Ashby’s Viral Content is another strong entry in the anthology, presenting a strong case for the need for an engaged and free media to prevent blatant wrongdoings from occurring in the same ways they have continually happened in the past. I found the future of mega-corporations sourcing ‘hyper-local’ news to be eerily believable, and the characters and situations presented in the story were also (sadly) this way. Censorship is in no one’s best interest, and Gloryanna’s determination to find the truth was a fascinating portrayal of the way even the largest of organisations can be undone by the determination of individuals to protect the innocent.

Brief Exercises in Mindfulness was another story that missed the mark a little for me, perhaps because I didn’t understand what message the story was trying to send about gentrification, mental health or gender politics. The story had a non-traditional structure somewhat similar to the cult-classic film Pulp Fiction, and much like the movie the ending is not what you might expect.

Karen Lord’s The Plague Doctors was another of my favourites from the collection, and reminded me very strongly of the Newsflesh series by Mira Grant. Another frighteningly plausible disaster-scenario is set up, with the solution once more being the insistence of ordinary people on finding a better way. I loved the way Audra’s personal life intersected with and mirrored the effect the plague had on her community, and the story itself elegantly mirrors class divides, refugee treatments and medical crises flawlessly. This story was engrossing and incredibly written, and I enjoyed every moment of it.

The Masculine and the Dead by Frank Bill closes out the anthology, and also proposed stronger communities and an increase in social justice and awareness as the solution for a myriad of problems. While the solution may seem simple, it is realistic, and this anthology is an amazing reminder that problems that seem too big for one person to face, let alone fix, need only the concerted effort of a concerned group. Guy—the protagonist of this story—while a strong and capable man, ultimately needs a variety of connections and relationships to enact real change.

Take Us to a Better Place Stories leaves you with a few less illusions about the inevitability of the problems the world is currently facing, and a quiet understanding that if enough people wished and worked for a difference, true change could come about. I’ll end this review with a thought from The Plague Doctors, it seems fitting.

“A luxury bunker is too narrow a world at any price. No more moats and walls. We will tend the garden for everyone.”

Take Us to a Better Place Stories releases on January 21st, and is available free from the Robert Wood Johnson Foundation.