You may have noticed that I’ve listed this anthology as book 4, that’s not because I don’t know how trilogies work, it’s because Hexarchate Stories contains a novella (Glass Cannon) set after the events of Revenant Gun (the third book of the Machineries of Empire trilogy). I was lucky enough to receive an ARC of this book, but I got sick, lost track of time, and only ended up starting it after it had been released. The good news is if this review makes you desperately want to read Hexarchate Stories, you can! 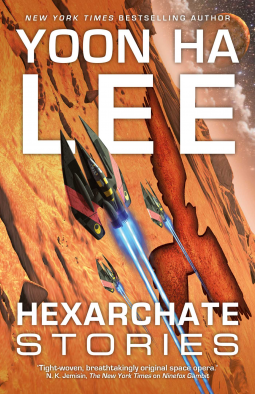 Good cover, eye-catching, if a little generic. I really want a ninefox crowned with eyes or an ashhawk on something, but I get that that might imply more of a fantasy novel; and this is definitely sci-fi

A general outnumbered eight-to-one must outsmart his opponent…

A renegade returns from seclusion to bury an old comrade…

From the incredible imagination of Hugo- and Arthur C. Clarke-nominated author Yoon Ha Lee comes a collection of stories set in the world of the best-selling Ninefox Gambit. Showcasing Lee’s extraordinary imagination, this collection takes you to the very beginnings of the hexarchate’s history and reveals new never-before-seen stories

Any of you who have read my book recommendations know that I love Yoon Ha Lee’s Machineries of Empire trilogy. This collection was amazing (no surprise), though the title is a little misleading—a number of stories are set in the heptarchate. I wouldn’t recommend anyone who hasn’t already experienced the wonder of the Machineries of Empire trilogy read Hexarchate Stories, only because without the background of the previous three books, a lot of the short stories could be confusing, or not enjoyed to their fullest. Glass Cannon in particular follows on from Revenant Gun in such a way that I actually ended up reading it straight afterwards to remind myself of the events of the book (review to come), and only ended up half convincing myself to re-read the first two books as well.

There is a fascinating variety of short stories included in this book, from delicate open-ended poetry (How the Andan Court) to action packed adventure-comedy (Extracurricular Activities); flash fiction that gives glimpses into some of the Machineries of Empire trilogy’s best characters (Hunting Trip) to entirely unexpected, but well-written erotica (Gloves). Gamer’s End even dips in to second person, and shows once and for all that Yoon Ha Lee is an incredible author, with pretty much boundless range. The author’s notes after each story are one of the highlights of the book, mentioning the inspiration for certain habits, characters or scenes; and providing insight into Yoon Ha Lee’s personality and past. It was fascinating, and it made me want to be a better writer.

The constant among the stories in this collection is the impeccable world building, gripping character development and diverse cultures and characters that fans of Yoon Ha Lee have come to expect. Almost every significant character from the Machineries of Empire trilogy has a moment to shine, with Jedao’s past being explored in the most detail. Cheris is not ignored, however, nor are various servitors and side characters from the series1, even Mikodez’s green onion gets a mention.

Glass Cannon deserves its own mini review, because it is essentially the follow up to the Machineries of Empire trilogy, and it has made me incredibly sad that there probably won’t be any further novels, especially because the plot lines and complications introduced in Glass Cannon could easily become at least one more book. I want more!

The plot is fast paced and interesting, with Jedao and Cheris’s viewpoints alternating throughout the novella. Some questions Revenant Gun left open are answered, other answers are implied or hinted at, and a lot of complications that I hadn’t considered are brought up. Cheris, Jedao and several other characters I’m not going to name to avoid spoilers interact in fascinating new ways, and we get to see Mikodez out of his depth for once. There are moments of levity, some fascinating, unique situations surrounding responsibility and morality, and one of the most classic science fiction questions of all: what makes us human?

Without spoiling too much, I’ll say that one of the (many) injustices left in place at the end of Revenant Gun causing people to hate Jedao (himself included) is cleared up a little in this book. He and Cheris don’t become friends, I think that would be too much to ask, but by the end of Glass Cannon, I think they understand each other a little better. Glass Cannon is a satisfying, entertaining read, with plenty of angst, humour and action. In all, a great conclusion to the Machineries of Empire trilogy, I’m just sad that it has to end.

I cannot recommend this book highly enough; Yoon Ha Lee is the author that made me give science fiction a chance. Anyone who loves science fiction will definitely find plenty to enjoy in Hexarchate Stories, but I also believe that anyone who enjoys great characterisation and ethical dilemmas in the vein of Jim Butcher’s Codex Alera series will also find plenty to enjoy. Anyone who enjoyed the military drama of RF Kuang’s Poppy War should consider reading this series. People who enjoy the political intrigue and personal anguish of Michelle Sagara’s Chronicles of Elantra series, those who loved the unique magic systems and morally grey world of Robin Hobb’s Liveship Traders or Farseer novels, and basically anyone with enough patience to immerse themselves in a nuanced and incredible world filled with fascinating characters should read this book, just make sure you read the Machineries of Empire trilogy first.

1This really is an anthology for fans, and I feel the need to reiterate—if you’re intrigued by this review and want to read the anthology, read the trilogy first! You won’t regret it