Gimme Some Sugar is the third book in a series that I’ve thoroughly enjoyed, novellas and full-length books alike, so I was a little surprised that while I enjoyed this book, I didn’t love it. 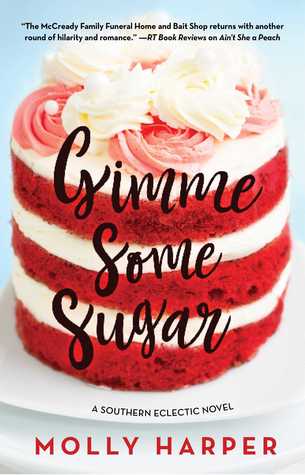 The cover is fine, colourful and pretty, if not overly specific to this book

A young widow returns to Lake Sackett, Georgia to face the ghosts of her past—and decide if she’s ready to take another chance on love—in the third sparkling Southern Eclectic novel that “goes down as easy as honey on a deep-fried Twinkie” (Library Journal, on Sweet Tea and Sympathy).

Lucy Brewer would never have guessed that her best friend, Duffy McCready (of McCready’s Bait Shop & Funeral Home) has been in love with her since they were kids. Fear of rejection and his own romantic complications prevented Duffy from confessing his true feelings in high school, so he stood by and watched her wed Wayne Bowman right after high school. Wayne had always been a cheapskate, so it comes as no surprise when he suffers a fatal accident while fixing his own truck.

Even as her family and friends invade Lucy’s life and insist that the new widow is too fragile to do much beyond weeping, Lucy is ashamed to admit that life without Wayne is easier, less complicated. After all, no one knew what a relentless, soul-grinding trudge marriage to Wayne had been. Only Duffy can tell she’s hiding something.

In need of a fresh start, Lucy asks Duffy to put his cabinet-building skills to use, transforming the town’s meat shop into a bake shop. As the bakery takes shape, Lucy and Duffy discover the spark that pulled them together so many years ago. Could this finally be the second chance he’s always hoped for?

Once again Molly Harper “writes characters you can’t help but fall in love with” (RT Book Reviews) in this charming and entertaining love story.

For some reason I was a little less invested in the characters in this book than I have been in previous Southern Eclectic novels. There were the usual hilarious southernisms, overstepping relatives and outlandish scenarios that are the hallmark of Molly Harper’s work, but the main characters in this book Lucy, Duffy and Sam, just failed to really capture my attention.

Lucy’s backstory fell a little flat, and for whatever reason, Duffy seems like the least interesting member of the MacReady family to me. Sam in particular seemed a little bland, with not much learned about him in this book. Nothing was learned about Duffy that was unique to Gimme Some Sugar, and I thought that minor characters like Donna and Specs were more interesting in this book than the couple that was the focus. The little touches that should’ve sold the depth of Lucy and Duffy’s relationship like their mutual middle school bullies that they later dated, and Lucy’s attempts to guess Duffy’s new favourite cake seemed surface level somehow, but maybe I was just feeling negative while I read this book.

The conclusion with Lucy and Duffy’s respective intrusive relatives seemed very abrupt, and even though the solutions were less dramatic and more realistic than some of those showcased in earlier books in the series, I think they were also less fun to read because of it.

That sounds really negative—I enjoyed this book. I read it in a little under twenty-four hours, I was obviously entertained. With lines like “Lucy cringed, so very hard. Duffy had seen her penis” in the opening chapters, how could I fail to be? I was intrigued by the hints at a potential relationship for Donna, hopefully there are future books or novellas to explore that, I’d also like to know more about Tootie and EJJ’s long-awaited cruise.

There’s a chance that I just related less to Lucy and/or Duffy than I have to previously featured characters1 and so didn’t like Gimme Some Sugar as much as I did the previous Southern Eclectic novels, but this book is only a three-star book for me: still good, but not ground breaking.

Overall, this was a quick, fun read, that I’d recommend to anyone who enjoys Molly Harper’s work, or light hearted, witty romance in general.

1I probably related most to Margot, but Eric and Frankie are also embarrassingly familiar at times