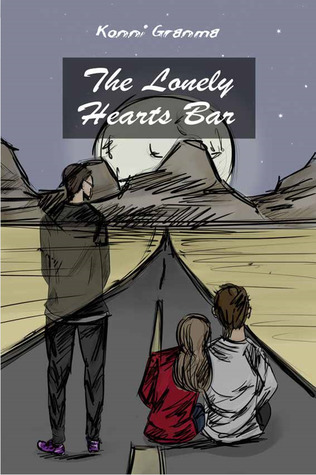 The cover hints at a far more definitive ending to the book than is provided, and does not match the tone of the novel very well

With high hopes of conquering Hollywood, the novel’s main character goes to Los Angeles to study directing and screenwriting. On the way, she ends up at a roadside bar that uncannily links the destinies of the main characters, who had given up everything to follow their dreams. What’s in store for the young rebels in Los Angeles? Does your dream have another side, one that’s just as enigmatic and invisible as the far side of the Moon?

More than anything, I found this book confusing. The content deals a lot with cinema and screenplays, and it almost reads as though it was intended to be presented visually. Characters that were previously mentioned reappear, but rather than their lives interweaving in a web of coincidences¹, they just run into each other and remember their one-off encounter, despite the unlikelihood of such an event.  The woman in the red dress was the most obvious of these, but Connie’s early encounters with Jack also seem quite artificial.

The plot was confusing and a bit aimless, not much ever got learnt about Connie (the main character) and the backstory of the other characters seemed spoon fed and two-dimensional. The storylines (plural) towards the end, when multiple characters end up suffering ill health so that their vulnerability could lead to emotional scenes somewhat reminiscent of a soap opera.

There’s a chance I’d have enjoyed The Lonely Hearts Bar more if I had watched all of the movies that are referenced, but I simply wasn’t interested enough to look them up. There were also several callbacks in The Lonely Hearts Bar (blueberries and hummus) that I assume were meant to indicate the depth and significance of the characters’ relationships with one another, but almost did the opposite. The relationships and characters were never explored or displayed in enough detail for me, so a lot of the tension and emotion in the book ended up falling flat.

Connie was the only female character that mattered in the story line, so there was a lot of ‘you’re not like other girls’ talk that made me roll my eyes rather than relate or feel like Connie was special and amazing. Not that I think that was the point. As far as I can tell, the point of the book seemed to be showing a bunch of people interacting while quoting movies at one another. Connie was shown to have ambitions, but her motivation to actually achieve them seemed lacking. The plot instead centered around her relationships with the other characters, which were never fleshed out enough for me to really appreciate.

The ultimate ending of this novel left me feeling cheated, and while there’s a pretty good chance that the ending was a reference to classic cinema that I didn’t understand,  I did not enjoy the way this book ended.

Overall, I don’t know that this is the sort of book I can recommend, as I feel pretty strongly that I’m not the intended audience. If you’re a diehard fan of classic cinema, an aspiring screenwriter or really love LA, there’s a chance that The Lonely Hearts Bar is for you.

¹As the blurb suggests