Time for the second review of 2019 (and the second book for my 50 book reading challenge), so I will also be separately starting a list of the books I’ve read—with links to reviews where applicable—if you’re interested check out the list here. This book I actually purchased, rather than receiving in exchange for a review, so this review is just because I thought you might like to know what I thought of the book1.

That intro was ramblier than usual, so lets skip right to the cover art and blurb. 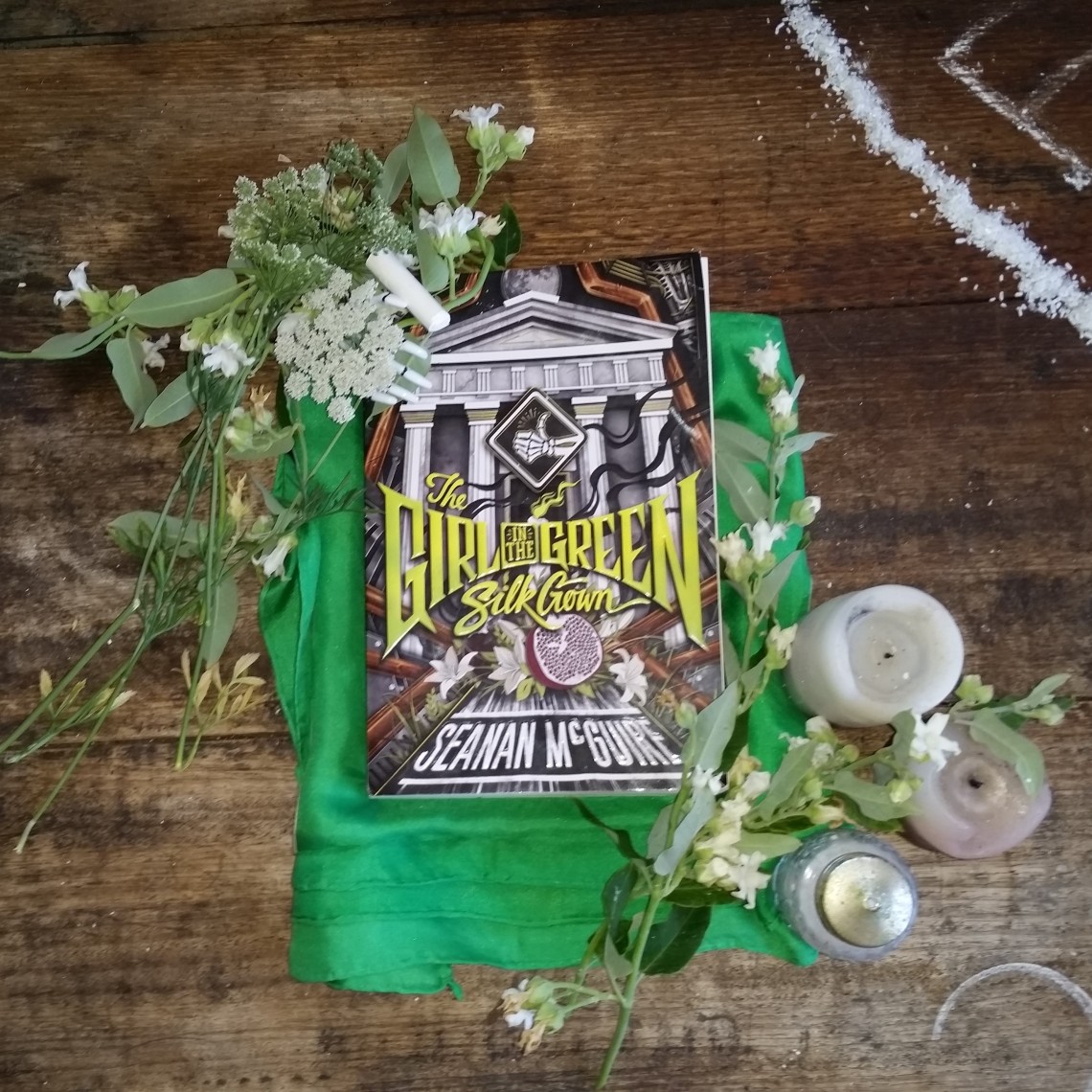 Isn’t it pretty? Doesn’t it hint at the furtherance of the mythos developed in Sparrow Hill Road melding classic Americana with Greek myths in a tantalising and aesthetically pleasing manner? Doesn’t it make you want to go to Etsy and buy that Ghost Roads pin before it sells out even if you don’t have whimsical-pins money and you should probably focus on getting a Real JobTM soon?2

The second book in the Ghost Roads series returns to the highways of America, where hitchhiking ghost Rose Marshall continues her battle with her killer–the immortal Bobby Cross.

Once and twice and thrice around,
Put your heart into the ground.
Four and five and six tears shed,
Give your love unto the dead.
Seven shadows on the wall,
Eight have come to watch your fall:
One’s for the gargoyle, one’s for the grave,
And the last is for the one you’ll never save.

For Rose Marshall, death has long since become the only life she really knows.  She’s been sweet sixteen for more than sixty years, hitchhiking her way along the highways and byways of America, sometimes seen as an avenging angel, sometimes seen as a killer in her own right, but always Rose, the Phantom Prom Date, the Girl in the Green Silk Gown.

The man who killed her is still out there, thanks to a crossroads bargain that won’t let him die, and he’s looking for the one who got away.  When Bobby Cross comes back into the picture, there’s going to be hell to pay—possibly literally.

Rose has worked for decades to make a place for herself in the twilight.  Can she defend it, when Bobby Cross comes to take her down?  Can she find a way to navigate the worlds of the living and the dead, and make it home before her hitchhiker’s luck runs out?

There’s only one way to know for sure.

Nine will let you count the cost:
All you had and all you lost.
Ten is more than time can tell,
Cut the cord and ring the bell.
Count eleven, twelve, and then,
Thirteen takes you home again.
One’s for the shadow, one’s for the tree,
And the last is for the blessing of Persephone.

I spent probably too much time setting up the arrangement for that photo, so let’s just move on to the review of the book itself. I feel like my reviews of anything by Seanan McGuire are sounding increasingly like evidence that would be produced at a stalker’s trial (see here where I was reviewing an anthology and ended up recommending her entire body of work, here where I go into rhapsodies about the work of her literary alter ego Mira Grant, and if you’re reading this any later than mid-2019, no doubt this blog will contain many a barely coherent ramble about whatever work of hers has most recently been published3). That being said, to provide incentive for anyone other than my immediate family to read this, I am going to provide an honest and unbiased review.

I really liked it. What! Honest and unbiased means I can say if it’s good, and it definitely was. Oddly enough, however, I think I preferred book one in the series (Sparrow Hill Road). I say oddly because Sparrow Hill Road was a collection of short stories bound into a novel, and The Girl in the Green Silk Gown is a more traditional novel, which I assumed I would prefer. I actually think the fast pacing and rapid, punchier storylines and characterisation leant to the first Ghost Roads novel by its unusual format is something I was expecting from the follow up novel, and that The Girl in the Green Silk Gown—with its more traditional story arc—didn’t quite provide.

I’ll also admit that I was a little disappointed that there weren’t any hints at what Antimony was up to; after Rose and Mary both made appearances in Magic for Nothing I’d hoped that there would be hints about That Ain’t Witchcraft4 in this book, and as far as I could tell there wasn’t any. There were hints at what I think could be a relationship for Emma (the bean sidhe that runs the Last Dance/Last Chance) diner, and I think that would be amazing. I love Emma and want her to be happy! Even if reading descriptions of the food served at the Last Dance always make me hungry.

Last on the list of not-really complaints (they’re not really complaints because I thoroughly enjoyed the book5, but I’m being fair and giving my full opinion, rambling and poorly edited as it is) is the lack of character development in this book. I feel like we just didn’t learn much about Rose or any of the other characters. We learnt a little about Bobby and Paul6, and some promising new characters were introduced (Pippa and Siobhan in particular spring to mind), but I just didn’t feel like anything really changed over the course of the novel. The whole plot was about regaining what Rose had at the start of the book.

Again, I could be unfairly comparing The Girl in the Green Silk Gown to the tour de force that was Sparrow Hill Road, with all the character development, world-building, and distinct, fascinating stories that were presented there; but I feel like this book was entertaining, with some great insightful lines about human nature and life in general, but that nothing in the characters’ lives really changed as a result7.

On to the parts I liked (ie—all of them).

I loved the comedic vein of this book, with the unexpected hilarity of Rose’s issues navigating her relationship with Gary—her car/boyfriend, and also the human world with the complications Bobby causes for her (I’m trying really hard not to give any spoilers, so apologies for the more-roundabout-than-usual wording).

I also enjoyed Rose’s interactions with Laura, I was about two-thirds of the way through the book before I realised how full the series is with strong female characters. I think it would probably fail the reverse Bechdel test—and I’m okay with that.

None of the characters in The Girl in the Green Silk Gown ever feel two-dimensional, even those that only appear for a short time have hints of a full life, with nuanced motivations, and I love that.

The mythology of the ghost roads and the various magic-users that Seanan McGuire peoples them with continues to fascinate me, and I loved the way this book deepened the mythos surrounding Halloween—so much potential for amazing anti-heroes or villains on either side of that situation.

I’ve been a sucker for Greek mythology ever since I read the Everworld series in primary school (and followed that up with reading straight up mythological texts, oh yeah, I was a party animal), so when I realised that Persephone-as-ghost-goddess was going to feature more in this book, I got really excited. I don’t want to be too spoilery, so let me just say that the inclusion of Greek myths and mythological figures within the book did not disappoint8.

1And as you clicked on a link to this article, I assumed right. Welcome!

2That last part is probably just me. Let me know if I’m wrong!

4Apologies to anyone who hasn’t read the books I just listed, the InCryptid series ties in with the Ghost Roads series in several places, and is an amazing read if you like urban fantasy, mythological beings and witty characters

5Honestly, I bought a physical copy! With my non-existent bookshelf space that is a rousing endorsement

6The doorman for Apple and the Ocean Lady

7With one noticeable exception that I won’t mention because spoilers, but to be honest I didn’t expect her to make a repeat appearance, so her change in circumstances doesn’t really effect the life of Rose and co

8Okay I know I said I’d stop advertising for Seanan McGuire’s work, but honestly, if you love Greek myths and enjoy Seanan McGuire’s (artful) writing style—read her Wayward Children series. The various afterlives and alternate worlds she creates there are… stunning