I don’t really know how to review this book, I don’t read many anthologies and I had varied opinions of the different works. I think for the sake of brevity I’ll keep my comments general, with slightly more in-depth reviews of my favourite works. There are definitely some confronting stories included in this book, and I actually cried reading one of them, but I think the messages conveyed by Shades Within Us are important ones. 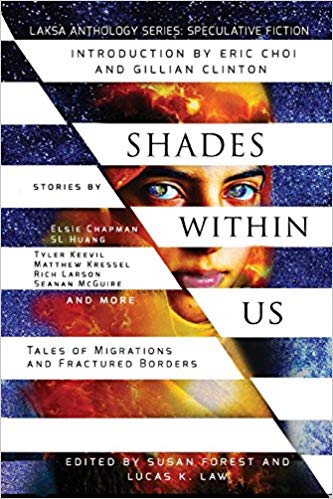 Look at that beautiful cover, doesn’t it evoke both the manifold nature of the human experience and also an anthology itself? Ah! I love it

Journey with twenty-one speculative fiction authors through the fractured borders of human migration to examine the dreams, struggles, and triumphs of those who choose or are forced to leave home and familiar places.

WHO ARE THE SHADES WITHIN US?

An American father shields his son from Irish discrimination. A Chinese foreign student wrestles to safeguard her family at the expense of her soul. A college graduate is displaced by technology. A Nigerian high school student chooses between revenge and redemption. A bureaucrat parses the mystery of Taiwanese time travellers. A defeated alien struggles to assimilate into human culture. A Czechoslovakian actress confronts the German WWII invasion. A child crosses an invisible border wall. And many more.

Stories that transcend borders, generations, and cultures. Each is a glimpse into our human need in face of change: to hold fast to home, to tradition, to family; and yet to reach out, to strive for a better life.

By far my standout favourites were SL Huang’s story Devouring Tongues, From the Shoals of Broken Cities by Heather Osborne (I’d never read anything by her, but now I really want to) and Remember the Green by Seanan McGuire to no one’s surprise. All three of these stories had a clear message, while still telling an engrossing and believable story.

Devouring Tongues told the story of a language scholar desperate to save her parents from themselves, providing social commentary that was heart wrenching but never preachy. The conclusion was amazing, and left me with a million questions about the world SL Huang created, and our own world, and the ways I have never experienced it, having never left the country of my birth.

From the Shoals of Broken Cities presented a haunting image of the world if climate change is never combatted, and the extreme and emotionally costly steps humanity may face if we continue to deny the effects of our actions. The worldbuilding and character development Heather Osborne managed in such a short word count left me in awe1, and I liked the natural way gay relationships were treated in the story (in a few of the stories, actually, and Voices also included non-binary gender identities, which was cool).

Remember the Green had Seanan McGuire’s signature timeless otherworldliness, and I wish I could explain the rich depth of her writing better than that. She manages to make you feel like the mythology of her world is something you’ve always known, and are just remembering along with the narrator. The voice in which Remember the Green is written is both Irish and other, futuristic with enough specific hints to tie it to this world that your brain accepts the events of the book as fact, and the magic and message along with it2.

I also very much enjoyed Imago; Porque el Girasol se llama el Girasol; and In a Bar by the Ocean, the World Waits, the worldbuilding in the first two in particular being fascinating to me. I want to read a novel length work by both authors (Elsie Chapman and Rich Larson) right now! The less obviously horrifying touches in Porque el Girasol se llama el Girasol in particular revolted me, in part because the progression from ‘subtle’ forms of othering like discouraging language diversity and racial profiling seemed to lead so naturally to forms of racism and xenophobia that seem all too possible—labour camps and mass deportation.

I really liked the theme of this book, and I think it succeeded in encouraging diverse voices and creative worldbuilding, while also providing timely and relevant commentary on social issues—xenophobia, racism and environmental concerns being common recurring themes.

There were a lot of great lines in this book, but I’ll restrain myself and share only two that work without context that also help to summarise some of the messages presented in the book.

“We rob the future…to preserve a past that is already dead.”

That line is from In a Bar by the Ocean, the World Waits; and I think the bleak future and uncomfortable feelings the short story evokes are proof of how necessary and well-crafted this anthology is.

The second quote is from the anthology’s opening short story—Porque el Girasol se llama el Girasol—and I think it ends this review on a slightly more positive note.

“We’ll have to do it first, and feel brave later.”

This anthology has no time forthe world’s current lethargic response to crises. None!

Shades Within Us is not always an easy or comfortable read, but I do believe it is an important one. If you enjoy great fiction with incredible worldbuilding that doesn’t skimp on social commentary, this book is for you.

1And tears. For anyone wondering which story made me cry, it was this one. Go read it!

2I stopped there, because I was getting needlessly poetic without actually getting any clearer, but seriously, if you’ll take one author/book recommendation from me it should be this—go read as much as you can by Seanan McGuire. She’s written a few short stories for Lightspeed Magazine that are free to access I believe, and there are also free works from her InCryptid world available on her website . She’s amazing, they’re amazing, read them.